As I shoveled the snow off my front walk, it seemed to me that I had just done this very task not so long ago.  Overnight the summer became a distant blur of sunshine,  long days, and smokey skies with power tools the constant soundtrack playing in the background.  Even though the trees still bear witness to the colors of fall, winter is officially here and with it brings a much needed pit stop on the trek to tiny.  It was just about this time last year that I began to seriously think about this project and the reasons why I should take this trek ,and I have had to circle back around those thoughts plenty of times this summer on those days that I wondered what I had gotten myself into.

My life these last few weeks has been driven by the weather and the noticeably shorter days.  I have enough money and energy invested into this little house that not getting dried in would be a financial disaster and the last scenario I wanted to play out would be having to tear down and redo because the North Idaho driven rain and snow had seeped into every corner of my little house on wheels. It wasn’t easy to blaze over to the job site after spending 8 hours in a hot, busy kitchen teaching teenagers how to knead bread or make gnocchi, but that’s what I did.  The three prominent men in my life continually showed up for me, being those extra hands that made the days work possible and safe.

The progress seemed slow, but we all look at what we accomplished with baby steps and are amazed.  If anyone is considering a project of this scope with the learning curve we had, here is a snapshot of what it takes.

At this point the weather is becoming a serious motivator.  There is still roof sheathing, ice and water shield, sub fascia and fascia, windows, a door, housewrap and the metal roof to go on.  I was thankful that I had purchased materials far in advance and had them ready to go. Late October to the first week of November… 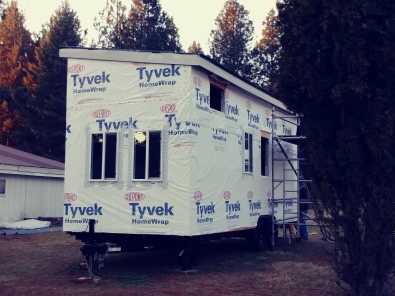 I’ve learned that I really don’t want to do rough framing again, that installing windows and the metal roof were relatively easy and highly rewarding.  I learned that hanging doors is tricky, especially when your out of square and that having friends who know how to fix that can save your day.  I learned that renting scaffolding is money well spent and that running power tools for days on end can create an annoying case of carpal tunnel.  But mostly I am grateful that outside of splinters and bruises, no one got hurt making my little dream happen.

I won’t be at the little house day after day for a while, but am already thinking about electrical and plumbing and have decided this not a phase I want to DIY.  I’ll do the layout and planning and bring in the professionals for the install. Spring will bring siding and I can begin the interior finish work with the hope that this time next year I am lighting a fire in my little wood stove and curling up with a book and a cup of tea.

Eat the elephant one bite at a time …